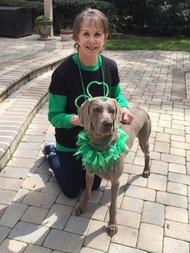 Alison has been a resident and active community member on Hilton Head Island for more than 35 years. Alison's own personal dogs include Champion show dogs and Master Hunters. In addition to teaching obedience classes and doing private dog training for the past 17 years, Alison also does temperament testing for both Hilton Head Humane and Beaufort County Animal Services. She is also involved with several local rescue groups. Alison has quite a following of regulars and her classes fill up quickly. Hilton Head's own "Dog Whisperer" has been featured in local publications such as The Island Packet, Pink Magazine, and Hilton Head Monthly. Alison is highly recommended by local vets, rescue groups, humane societies, and local pet businesses as well as by past and current clients. She is well known for making a huge difference in the lives of dogs and their owners.

​​Just as people have said there is no such thing as a bad child, only bad parenting, the same is true for dogs. When canines aren't trained properly, they can go from being man's best friend to being barking, leaping, fanged menace. Yet even an aggressive dog that bites people can be turned into a loveable pet with a little care and attention.

Enter Alison Armao, Hilton Head's own dog whisperer. Capable of getting the worst-behaved animals to shape up, Alison breaks down the psychology of dog ownership.

"First off, they need to be obedient and have respect for their owner, " said Alison, who has had dogs for as long as she can remember. "Then they need exercise and affection - in that order. When those three things aren't in their proper places, a dog is usually out of control and it begins to assume a leadership role in the family which it's ill-equipped to handle."

Alison began training dogs professionally after retiring as an accountant.

She wasn't particularly interested in making money, but rather in seeking "fulfillment and enjoyment" that come from doing a job you're passionate about. In addition to teaching classes and giving private in-home training, she also works with the Hilton Head Humane Association doing "temperament testing" on dogs that are put up for adoption, in order to determine what sort of home they would best fit into. She may also be called upon to do obedience training and behavior modification to correct problems so that dogs become adoptable. Often she uses her "pack" of four dogs - personal pets - to help to teach other dogs appropriate behavior.

In the 15 years she has been training and showing dogs - first her own, then those of friends and family, and finally as a business - Alison has only been bitten once, despite the fact that she frequently works with aggressive dogs. In fact, her most rewarding experiences are those when she manages to retrain a violent animal that would otherwise have to be euthanized.

"The animals immediately respect me because of the way I walk into the room," said Alison. "I don't show any fear or anxiety, I'm all business. I assume the dogs will behave and they do."

Out of everything she does, the most rewarding is her volunteer work with special needs children. "I had some free time, and I wanted to give back to the Hilton Head community, which has been very good to me," said Alison, who came here 29 years ago as a single mother and found this to be a great place to raise her children. So she began taking her therapy dogs to the Hilton Head Island School for the Creative Arts, where they can excert their calming influence on children with various disabilities.

"When I walk into the classroom, the kids start clapping and they run over to give me and the dogs a hug," said Alison, who loves reading stories while the kids pet and brush the dogs or give them treats. "It totally makes my day; it makes my week."